I don’t remember when trains became such a big deal in our house, but they certainly were a big part of our world for a couple of years. Henry’s favorite thing to do was RIDE MAX. We’d wake up in the morning, watch two episodes of Thomas the Train, then head to the Max station.

Henry would push the buttons to buy the tickets. While waiting for the train to arrive, he would keep a close eye on everybody to make sure we weren’t too close to the tracks. When the train arrived, he’d hop on and start the long arduous process of deciding where to sit. Then we would just RIDE. He’d stare out the window, usually with a big silly grin on his face. He would yell out “Another train!” when a train passed us going the other way. 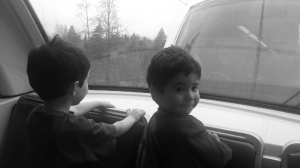 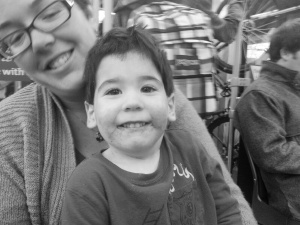 We would ride MAX several times each week. Towards the end, Henry would mostly sleep on the train. I don’t know if we kept taking him on the train for him…or for us. Maybe we just wanted to stay on the train a little longer. One more stop maybe…      (written by Henry’s dad, Lucas)

We would like to ask you as The Red Tricycle Brigade to go out and do a “trike” in honor of Henry’s love for trains. You could buy someone a train ticket, hand out goodies on the train, give a child a Thomas the Train toy, give the driver a bottle of water or anything else you can think of. If you don’t have a train in your community then trike your local public transportation. Don’t forget to take photos and post them on our facebook page.

HAVE FUN TRIKING ON THE TRAIN!

This entry was posted in First Fridays.

Annual Toy DriveFebruary 9, 2020
We are so thankful for each and everyone of you who has helped us keep Henry's tricycle of kindness rolling! Our annual toy drive for Randall Children's Hospital was a huge success! THE FINAL TALLY WAS 3,365 TOYS!! That's a lot of smiles. We're already looking forward to next year's toy drive (2/9/2021). Keep an eye out for those toy deals!